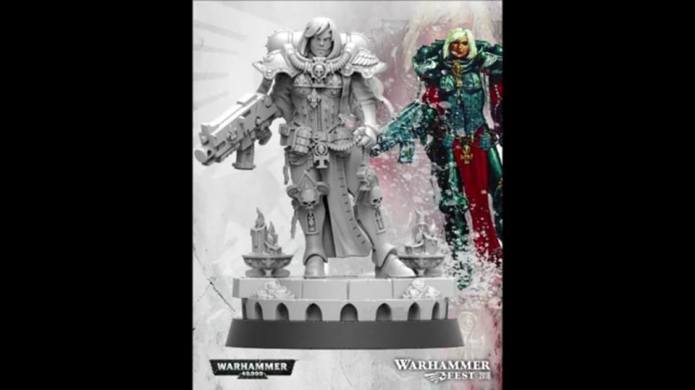 So, I acknowledge that I am criminally late in posting this, especially since I am a Sisters of Battle player. The past weekend has been both busy and…well, complicated for me, and so I have been somewhat distracted.

That being said…ohmygodanewSororitasminiIcan’tbelieveit’sactuallyhappeningaaaaaaaaaaa  is pretty much what my reaction was last Saturday.

To recap: WarhammerFest 2018 happened last Saturday in the UK, and among the many things that were previewed were the upcoming Adeptus Titanicus game, the new Nighthaunt army for Age of Sigmar, assorted Horus Heresy stuff…and the first preview of what the new Sisters of Battle are going to look like. And…all I can say is wow. The detailing on the model is absolutely beautiful– in particular I am blown away by the detail on her face (including the scarification), the smoothness and detail of the armour, and even her scenic base. The model almost perfectly captures the classic Sisters of Battle illustration that it’s being shown next to– so much so that a few users on Sisters of Battle boards have even wondered if she is going to be a new special character– ie, possibly Sister Miriya from the Faith and Fire novel that uses that illustration on the cover. I personally think it’s doubtful, but you never know.

There are a few important things to keep in mind, though: this is just a preview model, which means that, firstly, this particular model may not necessarily become part of the line when it’s released, and secondly, the actual range may not necessarily look like this, although I think it’s safe to say that this looks close. Some friends of mine have also pointed out that the model seems unusually smooth and clean-cut: this leads me to suspect that this is either a computer-generated test image, or an enlarged test model. If either case, then I think it’s unlikely that the final product’s level of detail will still be fantastic.

Even if it isn’t this fantastic, however, I will still be happy. If this model is anything to go by, then the new Sisters of Battle models will be everything that SoB players have been hoping for– dynamic, detailed and ornate, while not straying too far from the look of the original metal models. While I’m not about to ditch my current metal army for the new plastics (I have devoted too much time and effort to them for that), I will definitely be getting the new plastic minis to bolster their ranks.  Furthermore, while this mini has given me a decent idea of what the basic Battle Sisters will look like, I now find myself wondering about how the more specialized units will look when they’re– ie, Seraphim and Celestians, not to mention characters (hopefully they will have more than just Saint Celestine). I’m hoping they also do some of the Ecclesiarchy stuff, particularly Arco-Flagellants and Penitent Engines (the latter of which have some of the most horribly hard to assemble minis on the planet). And I’ll admit, a small part of me is hoping for a plastic return of the Repressor…