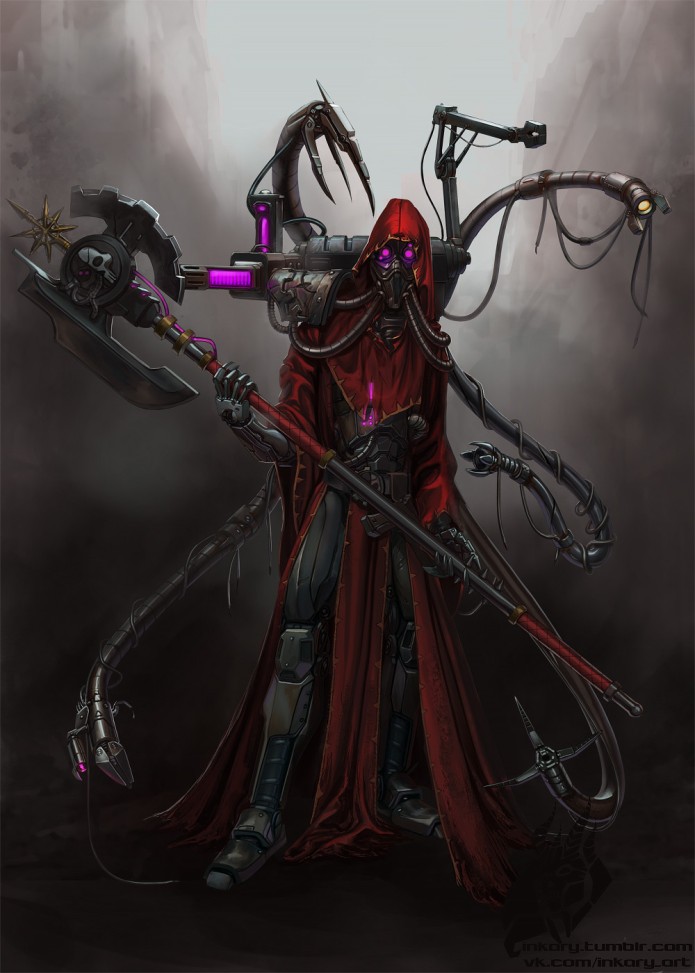 The alarm came from out of nowhere, piercing the sweltering, monotonous gloom of the forge like hot nails through lead. Magos Kelethrex had been overseeing the creation of yet another great war machine to be birthed within the magma-filled vaults of the complex when the alarm sounded, half warbling klaxon, half wailing shriek of thousands of trapped neverborn. The sound caused the lumbering, vat-grown serfs attending Kelethrex to cover their malformed heads and moan in pain, and more than a few slipped and fell into the hot magma of the forge, screaming before the molten metal consumed them. Even worse, the half-made construct in front of Kelethrex was driven into a frenzy by the sounds, the tank-sized conglomeration of steel and flesh thrashing and flailing in the great chains that held it above the pit.

Irritation surged through Kelethrex at that moment. “Enough!” he snapped, slamming the tip of his hell-forged axe down against the bedrock of the chamber, silencing the alarm with his will alone. As his serfs fought to restrain the thrashing machine-beast (many more dying in the process), Kelethrex channelled his forge’s security feeds directly into his neural uplink, his three emerald eyes glittering at the intact of scrap-code. In an instant, Kelethrex received the source of the alarm: intruders had been spotted in his forge’s lower levels. Somehow, they had bypassed his sentries and outermost defences, and at present, they were slaughtering any and all who stood in their path.

He managed to summon up a grainy pict-feed taken by one of the lesser surveillance-intelligences of the lower regions. He saw an image of a hallway, strobing red with alarms. More than a dozen figures darted through the corridor in that moment, moving with such speed and grace that Kelethrex had to slow down the feed to compensate. He noted the telltale slender figures, pointed ears and unnatural xenos grace of the Aeldari, though their serrated blades, garish clothing and looks of twisted mirth denoted them as that race’s darker kindred. As he watched, one of the xenos– an armoured figure, wielding a long double-edged blade and crowned with a sinister, horned helm– looked up at the pict feet, its faceless mask seemingly glaring up right at Kelethrex, before it swung its great blade in an upward arc and the feed shrivelled into static.

“Drukhari,” Kelethrex hissed. “No, this won’t do at all.” The perfidious xenos had no doubt come to sabotage his forge, to disrupt his great works. He had already pledged his daemon-engines to the cause of the Despoiler, for his continuous campaigns against the fractured Imperium. If he failed to deliver his war machines to Abaddon on time as he had promised…

He sent a mental summons into the manifold. A second later, one of his Sicarians– a ghostly thing of tattered rags, elongated, limbs, serrated blades and a steel skull-mask– arrived, emerging out of an alcove and crawling along the wall above Kelethrex like some vile insect.

“Kill the Drukhari,” Kelethrex commanded. “Let none of them disrupt my great work, or else what little flesh you have will be offered as this newborn’s meal.” He gestured to the daemon-engine, which even now was roaring in agony as it was lowered into the pit. The Sicarian simply nodded wordlessly, before skittering off into the gloom.

Kelethrex turned back to oversee the construction of the daemon engine. No, he thought grimly, this interference would not do at all…

A while back, I started turning my attention once again to Kill Team. I am quite fortunate that there is a dedicated Kill Team community in my city, one that meets at least roughly twice a week for gaming and for painting. It was at one such night where, for a random pick up game, I got my first experience with the game’s Arena expansion.

I had heard only a little about Arena up until then, and only knew that it was apparently much more tightly-wound version of Kill Team with narrower terrain, a more limited game length and much more well-designed scenarios and objectives (or so some people online kept insisting). So, deciding to give my Drukhari a test run again (this time with the Elites supplement for a higher 125-point limit), I decided to bring them to the field once again:

This list was mainly an attempt to experiment with as much of the new Elites stuff as possible, particularly the Klaivex, the Mandrakes, and the subfaction rules. I was operating with the understanding at the time that Drukhari subfactions cannot intermingle in Kill Team like they can in 40k– that I can only choose one subfaction, and as a result must either play a pure Wych, Kabal or Coven kill team, or play a mixed team without subfaction rules. (This is still my understanding, by the way, unless some astute readers decide to correct me). Otherwise, I made this list with the aim of getting as many bodies on the field as possible, swarming my opponent and stabbing him to death. Nice, simple, and to the point (hehe, point).

My opponent, meanwhile, brought the following:

I had not faced the Mechanicus in Kill Team before, though given what I knew of them in 40k, I had a somewhat decent idea of what I would be up against. In particular, those Sicarians would be a rather scary prospect to deal with in melee, but hopefully I would be able to bring them down with superior numbers.

As this battle was a while back, I am afraid I don’t remember the exact details of the scenario, save that there were 4 objectives and each turn we could sabotage one for added points. For personal objectives, I took (from memory) Domination, Cut Them Apart, Thin Their Ranks, and some scenario-specific objective I forget the name of. My opponent had Thin Their Ranks, Scout The Field, and I can’t remember what else.

Again, since this game was a while back, this will be more of a summary than an actual battle report.

Thoughts: My plan going into the game had just been to rush my opponent from two angles, hoping to use my superior speed to get into combat with as many models as possible, slice him up, and swarm the objectives. As it turns out, that had been my opponent’s plan as well. As far as plans go, however, this one ended up morphing in mid-game, with me going for a strong attack on the north of the board while holding the south with a handful of models, and him doing the exact opposite. At it turns out, I was easily able to overwhelm the centre, while the few models I had defending the south of the board just narrowly avoided being overwhelmed by the Sicarian onslaught.

For my first game in Arena, I must admit that I am very impressed at how fast-paced the game feels: the close-ranged nature of the engagements means that more time is spent in short, decisive fights than in endlessly manouvering for better positions, and the fact that each player has their own objectives to fulfill means that the game can still go either way even if one player is getting more objectives or killing more of the enemy team. As for the new content from Elites, both the Mandakes and the Klaivex are great additions to the Drukhari roster: the Klaivex just straight up murdered the one Sicarian he fought, while Mandrakes, just like in 40k, are extremely reliable with their potent shooting attack, decent strength in melee, 5+ invulnerable save and -1 to hit ability. Similarly, I like the addition of subfaction rules to Kill Team, and look forward to testing out Kabal and Coven teams (with some of the other new Elites units…I’m looking at you, Grotesques) at some point in the future.

One thought on “Kill Team Batrep: The Daemon Forge”